This week on the podcast Aaron and I talk about the first three episodes, our favorite BJJ brands, kimonos, what we are working on the mats, travelogues, training music and a bit more. Enjoy!

The Jiujitsu Geeks were lucky enough to get some chat time with Certified Strength and Conditioning Specialist, Jason Struck. Jason runs CrossFit Full Circle in Mechanicsville, Va and is working towards his masters in Exercise Physiology. He also has a martial arts background and practices BJJ when time allows. We easily could have spent 5 hours talking to Jason but we respect the mans time and will have him back soon. Enjoy the Podcast and be sure to visit Jason's blog and website.

www.facebook.com/CrossfitFullCircle
Posted by Unknown at 7:56 PM No comments:

Proof Rickson is an Alien Inside...

Is just one story you will not find in the new BJJ Legends or Jiu-Jitsu Magazine. However, both are packed with great interviews. 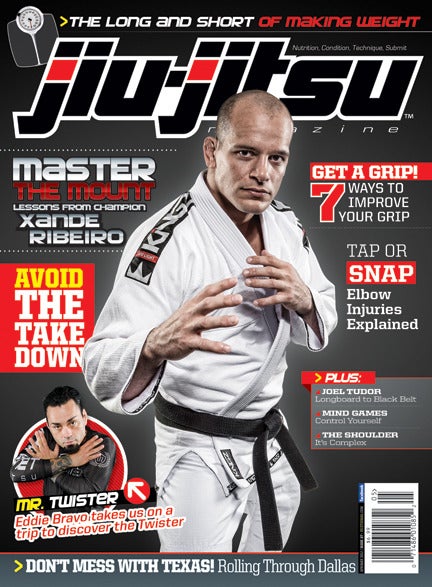 Among several good articles, Jiu-Jitsu Magazine has an interview with Xande Ribeiro and Joel Tudor. Xande covers competing, injuries, diet and shows some technique from the mount. The interview with Joel covers what else but Jiu-Jitsu and surfing.

The highlight of BJJ Legends is the interview with Saul & Xande Ribeiro. The brothers go into Jiu-Jitsu philosophy and the interviewer, Mafu Kobus, does a nice job of letting them run with their ideas.

Both are available now at Barnes & Noble. However, you have to order BJJ Legends from Budo Videos because I took the image of the magazine from their website. Thanks Budo Videos.

Aaron
Posted by Unknown at 9:10 AM No comments:

In this podcast the Jiujitsu Geeks talk to Chris Mahan. Chris is a black belt.....actually, he can talk about himself better than I can.

Interview With Derek From 31Fifty


Derek Okahashi is the creator and driving force behind 31Fifty, a quickly rising BJJ focused apparel company. Derek was kind enough to take time out of his busy schedule to answer a few questions for the JiuJitsu Geeks. I can say from personal experience that Derek puts out high quality shirts and hoodies and is very customer focused.
His website can be found at www.31fifty.com

JJGeeks - What is your BJJ background? Where do you train and who under?

I am a blue belt under Diogo Gomes and Fabio Prado here in Northern California.  James Valentine is also a good friend and mentor of mine.  James and I train at different academies but we were stationed together in the Coast Guard and he played a huge part in my BJJ game early on with all of the private and semi private lessons I ended up getting at the Coast Guard Island BJJ Club.

JJGeeks - How did 31Fifty come about?

I started training and felt the same kind of passion I felt growing up surfing in Hawaii.  I needed some BJJ gear but there were no brands with Hawaii roots at the time.  I was also very poor and a $30 Shoyoroll or Fokai tee was hard to justify.  I really just wanted to make enough to pay for my own 31FIFTY tees so I could rep something I believed in.

JJGeeks - If you have a full time profession, how do you juggle it and run 31Fifty?

I am in the U.S. Coast Guard but dropping to reserve status in April.  I have also been a full time student, husband, and BJJ practitioner.  It's tough!!   Something always has to give. There are only so many hours in a day.  Without the support of my wife and some good people behind The 31FIFTY Project like Neeko, Cristina, Ben and others I wouldn't be able to do it.

JJGeeks - Where there any struggles to get it up and running?

Definitely. The night that Daniel Moraes reached out to us to represent 31FIFTY at the 2010 NOGI Mundials, I had decided I was done.  My wife and I were stressed and I had decided that it was a good short run at it and I was done.  I even told my coach Diogo that I didn't want to sponsor Daniel. He explained to me that I was crazy and I gave it one more shot.  Daniel helped us a lot.  He was that big name that every brand needs to boost them to the next level.  He's also one of the coolest multi time World Champs that you'll ever meet and train with.

JJGeeks - The homage series seems to be very popular. It looks like most have sold out. Will you be reprinting any of the "Would Roll" series? Who else will be getting the homage series treatment in the near future?

That's G14 classified.  Haha nah, we will not be reprinting the CARLOS HELIO HOMAGE (...would roll) tees any time soon.  We've made a couple of WOULD ROLL tees for some of the guys we sponsor liek Sonny Nohara, Mike Fowler, and Charuto Verissimo.  These are real small runs and generally not available to the general public but definitely email us if you're a fan of these guys and are looking for one. We'll see if we can work something out with Rickson and all of his brothers to slowly bring you limited releases in their names ;)

JJGeeks - The designs of 31Fifty seem more "pure", for lack of a better word, then other BJJ and MMA brands. Is this something you are doing to differentiate your brand from others?

Like I said I was raised in Hawaii and grew up surfing every day.  Here in NorCal I don't get in the water often because it is freezing but I like to stay active whether it's BJJ, Crossfit, hiking, camping...  I think what ends up getting produced is a mix of all of these cultures.  Predominately our inspiration for designs comes from our island backgrounds but there's a mix of other influences when I'm coming up with new concepts.  I hope we are differentiating ourselves from other brands.  If we like it, we run it and hope you like it too.

JJGeeks - How has the BJJ community reacted towards your brand?

The reaction has been really positive.  We have heard things like "best brand; cleanest stuff out there; love the simplicity ad lack of gimmicks..."  We are having fun and the brand is growing so that is a good sign.

JJGeeks - What is the best thing about running 31FIFTY?

The training and the friends I've made!  I get the opportunity to meet and train with so many people across the country.

JJGeeks - Where do you see the 31Fifty brand going in the future?

You'll probably see kimonos from us at some point.  We have to figure out how we're going to do it different though.  Everyone is doing kimonos right now, 31FIFTY has to be unique.  We have gotten offers to make kimonos from big names to little Pakistani factories.  Quality and 31FIFTY customization are most important.  I'd rather wait 2 more years to have the right product for us than to push out a subpar kimono in 2 months just for the sake of becoming a kimono company.
It'd be a dream come true to have a small studio in either San Clemente, CA or somewhere back home in Hawaii with a large mat space, racks for all of our boards, and an outdoor shower.  We would train, surf, design, market, and have an open door policy where anyone could train on our mats regardless of affiliation.  I also want to make sick lifestyle documentaries showcasing jiu jitsu in America and the positive lifestyle that goes along with it.

JJGeeks - Who is the best person you've rolled with?

(Michael) Fowler.  I felt stupid even when he let me pick my favorite position. I felt like a 1st week white belt all over again.

Of course everyone on the 31FIFTY team but outside of them I really like to watch a few of the young brown belts in Northern California.  Sean Roberts, Tanner Rice, and Nathan Mendelsohn are really fun to watch.  Ice Cream Kron is always fun to watch too.

JJGeeks – What is the best part about jiu jitsu for you?

The positive and healthy lifestyle.  I know it's cliché but jiu jitsu really is my therapy.  I have a really hard time focusing on things but when I am training, I can zone out and focus on the smallest details and drill them over and over.  I will train 'til I die!

I just want to thank everyone who supports and reps 31FIFTY.  Hopefully we will be that brand that rose up, stuck to its roots, and brought all of the other grass roots followers with it.  Let us know what you think of the brand or what you want to see next from the brand and hopefully I get a chance to train with some of you one day.
Aloha! Derek aka" Hawaii"

Posted by Unknown at 5:44 PM No comments:


I am still playing around with several options for getting our podcast to the public. Editing, mixing, & recording are all pretty time consuming. Thankfully there are free podcast hosting services available for newbies like myself and Aaron.
That being said, the first podcast is available on podomatic.com You can check it out through the link below.


A big thanks to the Valente Brothers for adding English subtitles to a Biography Channel documentary on Helio Gracie. Click the CC button if you can't see the subtitles. Enjoy!

Aaron
Posted by Unknown at 4:47 PM No comments:

Oswaldo Fadda's name may not be as instantly recognizable to BJJ practitioners as Helio and Carlos Gracie but he holds a unique place the arts history. Fadda, a native of Rio, learned jiujitsu from Mitsuyo Maeda and Luis Franca and in turn helped spread the art to the poor. This is a sharp contrast to the Gracie family who boasted a more influential clientele that could help publicize the Gracie name.
Fadda and his students focused on foot locks which were (and some would say still are) neglected in the Gracie academy. Fadda issued a team challenge to Helio Gracie and in the end Fadda's team came out ahead. The victory earned Fadda the respect of the Gracie patriarch who publicly acknowledged that the Gracie's were not the sole owner of jiujitsu. In time Helio would present Fadda with a 9th dan, a rare honor for a non-Gracie.

In 2005 Oswaldo Fadda passed away at the age of 84. His lineage lives on in team Nova Uniao.

In February 2012, Fadda was honored on a t-shirt by BJJ apparel company 31Fifty. The shirt had a limited run and sold out almost immediately. Luckily Aaron and I were able to order our shirts as soon as they went on sale. I am sure if enough people request it a second run of the design will be printed. 31fifty is one of a few new BJJ apparel companies that represent the art well. No skulls, dragons, flames or swords in their designs. The Jiujitsu Geeks respect these guys. 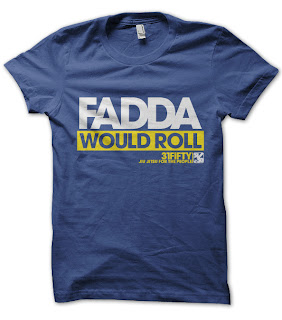 Posted by Unknown at 6:06 PM No comments: