On this episode of the podcast we talk to Clark Gracie. Clark talks about training in America before BJJ was popular, his famous family, the Gracie diet, and his philosophy of the gentle art. Enjoy!

You can learn more about Clark Gracie by visiting his website here..

Click the link below or listen through iTunes. We are listed under "JiujitsuGeeks" 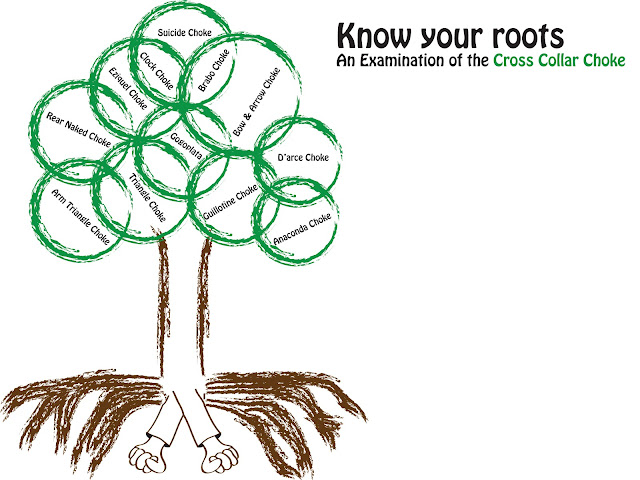 It’s the oldest trick in the book.  Everybody knows it and everybody can see it coming from a mile away.  Yeah, you know what I’m talking about… the cross collar choke.  Ever learned it?  Of course you have.  If it wasn’t the first submission you were shown when you walked into the academy, it has to have been in the top 3.


Primarily seen from either the guard or the mount, it’s a classic gi submission.  Now, the second part of the question:  when’s the last time you caught somebody with it?  (Subbing the guy that started training last week doesn’t count.)  How’s your success rate with it?  Unless your name is Roger Gracie, chances are that your technique needs some work.  (And if your name is Roger Gracie, want to come on the podcast and talk to us?)


There are a few different ways (grip-wise) to set up this choke, though the most popular seems to be the “both palms up” method.  There’s also the “one palm up one palm down” when you bring the second (palm down) hand around and grab the fabric on the opposite side shoulder/neck.  And don’t forget about the “one palm up opposite thumb goes in and bring the arm around” version.  The videos below show a mix of all three of those grips.  So check it out below, fellow Geeks, and you’ll be subbing fools with Grandmaster Helio’s favorite choke before you know it!


Here’s a Professor Pedro Sauer instructional on the choke (using the "both palms up" grip) with the finer points outlined.  Check out how he flexes his wrists before he starts using his arms to bring his opponent chest-to-chest.

Here’s a video of the modern-day master of the cross collar choke explaining it.  This goes over how to get the choke from mount, which Roger is known for, including where to place your feet and knees to secure your opponent.  The version he shows here is the “thumb-in” version, which if you get your thumb behind their head, will get tight on the opponent as soon as you flip your arm around to form the “x” on their neck.  Yay!

And for those of you who think you can only do this with a gi, check out this video showing otherwise.  The hand positioning in this version is the “palm down” grip as well, but instead of putting the thumb in he grabs the fabric near the shoulder.  Since bunching up a t-shirt will create that handle at the bottom of the t-shirt material that “palm down” grip is easier to get in this version, rather than with a gi when it’s harder for your fingers to get a grip.  Of course there’s no way you could get away with this in a no gi competition, but still… never hurts to know it.


Mostly still on topic, here are the Gracie brothers with a preview of the video they put out a few years ago of “street chokes” where you use everyday pieces of clothing to choke your opponents.  The cross collar choke is featured in several different forms.  It’s not the whole video, but it gives you an idea of what they show if you want to buy it.  Having watched the whole video a few times I can tell you that most of it is stuff you probably already know, but some of it is pretty sneaky.  It’s worth a watch.


And just to give you something to aspire to, here’s a highlight reel of Roger.  Check out the section devoted entirely to the cross choke (starts about 01:30) he’s subbing the best guys in the world with the most basic choke there is.

Now, get on the mats and practice choking people!


Train Hard,
Brian
Posted by Unknown at 11:17 PM No comments: